1940 The Rowena Longmire Student-Alumnae building, named after Associate Professor of English and former President of the Alumnae Association, opened in the Fall of 1940. This building was described as “the center of activities for student organizations.” It also served as the center for social and recreational purposes for faculty and students. 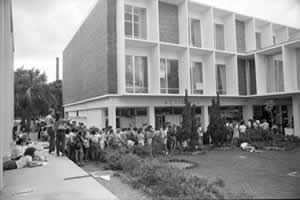 1952 The Student Center, which they referred to as “the alum,” was completed in 1952 and provided students with a gathering place other than Longmire. The Student Center had a snack bar, jukebox, and a room for dancing. This area was later given over to the post office.

1964 An extensive enlargement of the Student Center was constructed and dedicated on November 14, 1964.   Named the University Union, the complex contained dining rooms, games rooms, a barbershop and a beauty shop, a ticket office, lounges, an auditorium, offices, meeting rooms, and an Olympic-sized swimming pool. The buildings in the complex were named the Davis Building, Activities Building, Crenshaw Building, Moore Auditorium and the Union Pool. This complex was 130,000 sq. ft. in size. 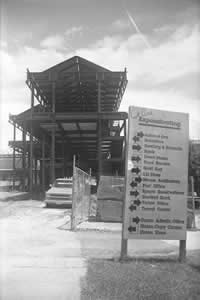 1988 Nine million dollars funded by the Capital Improvement Trust Fund (CITF) was given to the university for the purpose of renovating and expanding the Oglesby Union Complex. With these funds, 60,000-sq. ft. of the original complex was renovated, and a 96,150 sq. ft. new building, later named the Turner building, was added. This construction project added a computer lab, a video center, a Senate chamber, thirteen additional meeting rooms, an Art Center, six retail locations, a video games arcade and about twenty new offices.

1995 A three million dollar renovation and expansion project, funded with CITF dollars, renovated many aspects of the 30-year old Activities Building (i.e. roof replacement, relocating water and sewer lines, renovating restrooms, etc.). CITF funds were used for the renovation of the site formerly occupied by the bookstore. Additional meeting room space and expanded office areas in the Activities Building were also among the changes made. 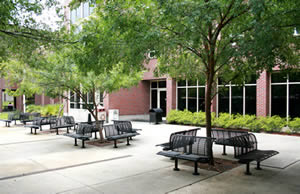 2000 The Student Life Building (dedicated as the Reubin O’D. Askew Student Life Center in 2006) is a vital addition to the ‘student services corridor’ running from the Union to the University Center. It features several facilities that enhance student life at FSU. It includes: a state-of-the-art, 380 seat multimedia theater, complete with teleconferencing and satellite down linking capabilities; four 35- seat, high-tech, business-quality meeting rooms, also with multimedia capabilities; a Graduate Student Center which provides office space, meeting and workspace for the Congress of Graduate Students; office, meeting, and workspace for the National Pan-Hellenic Council (NPHC) student organizations; offices for the University Housing Office and Student Counseling Center; a cyber café for computer gaming and a dining facility which provides expanded on-campus food service. The Student Life Building was an eight and one-half million dollar CITF project.

2001 A $2,458,350 CITF renovation of the ballrooms in the Turner Building and the third floor of the Activities Building were accomplished in 2000-01. The ballroom’s 36-year old air handling equipment was replaced. In addition, the ballrooms received a major sound system and control console; replacement of the glass front on the balcony with a combination of glass and brickwork; carpeting; lowered ceilings and light fixtures and other cosmetic improvements. The third floor of the Activities Building was developed into a state-of-the-art Student Activities Center. It serves as a major resource center for event planning, program planning, student organization recognition and advisement; and leadership training. It is the home to the Oglesby Union Board, Student Government Association (SGA) Publications Center, many SGA agencies and Recognized Student Organizations. 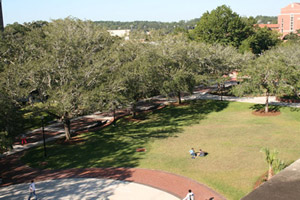 2006 After a two-year renovation, the Union Green was completed. Prior to the renovation, the space was an open green area that had an antiquated and inadequate drainage system. The area was also in desperate need of new landscaping. The Union Green now serves as a place where students can congregate, vendors can advertise, and special programming events can be held. 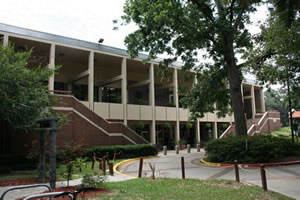 The ROSCOE R. OGLESBY UNION COMPLEX was named in 1974 after Dean Ross Oglesby, who had been at The Florida State University for nineteen years as Professor of Government and concurrently for ten years as Dean of Students. While Dean, he was instrumental in remodeling and expanding the Union and its facilities. At a dedication ceremony in 1975, he was described as “a friend of students,” one of the key planners of the University Union, and a scholar in International Law. He sought to make all of University life a learning experience.” The complex encompasses all of the buildings listed in chapter 101, which house dozens of departments and organizations. The Oglesby Union Board does not have jurisdiction over the Union Post Office Building. Instead, it is overseen by Business Services.

The CRENSHAW BUILDING was named in 1964 after Robert “Bob” Edward Crenshaw, a 1956 graduate. Bob Crenshaw was the son of Mr. and Mrs. E.E. Crenshaw of North Miami, Florida. Crenshaw was president of the 1956 class and co-captain of the football team. He was also president of the junior class, a member of Omicron Delta Kappa, Gold Key,and The Florida State University Hall of Fame. In 1956 he was named to Who’s Who in American College and Universities. He was a member of the Alpha Tau Omega social fraternity. While on active duty as a U.S. Air Force pilot, he was killed. This building that bears his name houses recreational activities including bowling and billiards.

The DAVIS BUILDING was named in 1964 after Helen Morris Davis, a graduate of the 1929 class of The Florida State College for Women. As a student, she was a member of Omicron Nu, the “F” Club, and Alpha Omicron Pi Sorority. She served in the U.S. Army as chief of the dietetic section of the Medical Specialists Corps where she received the Legion of Merit for her work in modernizing hospital food services. She retired from the Army with the rank of Lieutenant Colonel. The Davis building currently houses the Union’s food services and food court.

The MOORE AUDITORIUM was named in 1964 after Coyle E. Moore, Jr., a 1956 cum laude graduate. His parents were Dr. and Mrs. Coyle E. Moore, Sr. after whom the Moore Athletic Center was named. Moore served as president of the student body; he was a member of Kappa Alpha Order, Phi Kappa Phi, Phi Eta Sigma, Omicron Delta Kappa, Gold Key, and Circle K. He was named in The Florida State University Hall of Fame and Who’s Who in American Colleges and Universities. Picked as the outstanding ROTC cadet during his sophomore and junior years, he was also selected in 1954 as the “Most Outstanding College Student in Florida.” Moore died in 1961 after a heroic battle against cancer. With several technological updates, this building functions as an auditorium.

The DR. NANCY A. TURNER BUILDING was named in 2003 for Dr. Nancy A. Turner, a 1961 and 1977 FSU graduate. As a student, Turner was involved with hall government, the Baptist Student Union, and also served as a Junior Counselor. She had an exemplary professional career at FSU in Student Affairs. Serving as Union Director from 1979 – 2003, she oversaw major renovations of the Union complex, including the addition of the Nancy A. Turner Building, creation of the Student Activities Center (SAC), makeover of the Union Ballrooms, and the addition of the Union Food Court and Union Art Gallery. Under her direction, “Art in Low Places” was created, “Later,” the Friday late-night initiative now called “Friday’s At the Union” was developed; the Club Downunder found a permanent home, and the film series left the confines of Moore Auditorium for the state-of-the-art theater in the Student Life Center. Through her efforts as director and mentor to staff and students alike, the Oglesby Union developed into one of the premier unions in the country. This building functions as the Administrative Offices for the faculty and staff of the Oglesby Union Complex.

The ASKEW STUDENT LIFE CENTER was named in 2006 after Reubin O’D. Askew, a graduate of The Florida State University in 1951. Askew was Student Body President, a member of Omicron Delta Kappa, Gold Key, Delta Tau Delta, and Alpha Phi Omega. He enlisted in the United States Army paratroopers in 1946 as a private and was discharged as a sergeant in 1948. He served in the Air Force from 1951 through 1953 as a second lieutenant. He began his public career as Assistant County Solicitor for Escambia County in 1956, and served until 1958. He was elected to the House of Representatives in 1958 and to the Senate in 1962. He served as President Pro Tempore from 1969 to 1970. He was elected Governor in 1970 and reelected in 1974. He was the first governor to be elected for a second, successive 4-year term. He named the first African American Justice of the Supreme Court, the first woman to the State Cabinet, and the first African American in a hundred years as a member of the Cabinet. He delivered the keynote address at the 1972 Democratic National Convention and served as chairman of President Carter’s Advisory Committee on Ambassadorial Appointments. The Askew Student Life Center currently houses the counseling center, a movie theater, graduate center and The Florida State University Housing Department. 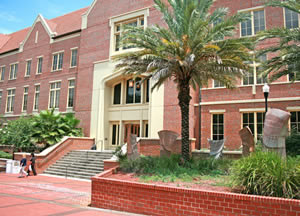 The STUDENT SERVICES BUILDING, which is partly the responsibility of the Union staff and Oglesby Union Board, was opened in January 2004. Located on the Woodward Plaza between the Oglesby Union and the Student Life Center, the building features several important services including the Student Disability Resource Center, the Division of Sponsored Research Services, Sponsored Research Accounting Services, The Florida State University Research Foundation, and a 24-hour diner. In addition, the Oglesby Union oversees the second floor, which is 13,000 square feet. The second floor includes four conference rooms; 3 meeting rooms; 1 reception room; and 1 banquet room.

The ACTIVITIES BUILDING originally opened in 1964. The third floor was designated for programming organizations (SGA agencies, clubs, and the Leisure Program Office-the predecessor to what is now Union Productions). The second floor was designated for SGA and SGA agencies. The first floor was used as retail space. The university bookstore was located where the Art Center is currently. A university ticket office and banking center was located in the space now occupied by the Kaplan Testing Center. There was also a hair salon where the convenience store is presently located. Over time, changes in occupancy occurred. Through the years there has been a clothing store, and a bicycle repair store. The third floor was remodeled into the current Student Activities Center. The second floor was renovated to sectionalize Student Government offices into its current configuration.’ 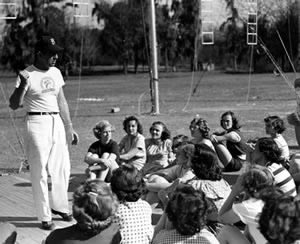 The HASKIN CIRCUS COMPLEX was founded by Jack Haskin. He founded the unique FSU Flying High Circus in 1947 after Howard Danford, FSU’s first Athletic Director, asked Haskin to help him find a creative way to combine male and female activities at the newly formed coeducational University.

The MICCO ROOM was named in 1976 Holato Micco, former chief of the Seminole Indian tribe. He was also known as Billy Bowlegs, sometimes called “King” or “General” Bowlegs, and was chief in the mid1840′s.

The BRANDEWIE SENATE CHAMBER was named after Robert A. “Bob” Brandewie in a ceremony on September 28, 1988. Mr. Brandewie worked for The Florida State University for nineteen years, thirteen of which were devoted to being a liaison to the Student Government Association. His experience and knowledge of student affairs made him an unparalleled resource for student leaders.

The CAROLYN KRENTZMAN LOUNGE was named after Carolyn Krentzman in a ceremony on October 3, 1997. Ms. Krentzman served as the Space Reservations Coordinator during her seventeen years working at the Oglesby Union. She retired in 1981 after twenty-six years with Florida State University. Her commitment to the ideals of a college union, and to the students with whom she worked, was second to none.

The GRADS MADE GOOD ROOM was dedicated in 2003 to honor distinguished alumni who received the Grads Made Good Award. Begun in 1973, Omicron Delta Kappa initiated the Grads Made Good Program to honor former students of The Florida State University who, in their years since earning their degrees, have achieved outstanding success and recognition in their chosen fields at the national and international levels.

Square Footage of the Complex

Directors of the Oglesby Union Complex